My partner, Stephen, and I set off to spend the day together yesterday. We had no idea where or what we were going to do. Because photography is one of Stephen’s passions, we did at least know he would bring his camera in tow. We would just drift along with the winds and our whims. We gathered our things for the day- camera equipment, sunglasses, hats, and our explorative, happy hearts. We settled into the car, with Stephen behind the wheel, and started to drive. Where to, we still did not know, but we were excited nonetheless. Stephen looked at me, smiled gently, and said that he wanted to travel wherever he felt pulled to go. Intuition would spontaneously guide our way. I more than agreed. We shortly thereafter found ourselves at the freeway entrance, and he coolly announced, “It looks like we are going to go south.” And so, the day began.

From where we live in Bellingham, Anacortes is an easy drive away. Anacortes is a familiar bayside town, home of the ferries that transport many travelers to Port Townsend and the San Juan Islands. We had stopped there once last summer as we originally traveled into the state, relocating from Northern California into Washington. Since we had not returned for a visit since, we were inspired to stop there for a walk around town, enjoying a little photography along the way.

However, while there, I could not help but notice signs for a place called Deception Pass. I had heard of this pass, of its beauty and mystery. I had seen many photos and paintings of the lands and water around it, of the cliffs, trees, and the twin bridges, and I had heard many stories. The pass earns its name due to the deceptive strength of the water that flows through the narrow straight-like bay. The swift, powerful current forms standing waves, large whirlpools, and roiling eddies that are a struggle for boaters to maneuver. The idea of exploring this new area immediately ignited my drive, lit my heart, and led our day into an unexpected adventure full of wonder and spirit. 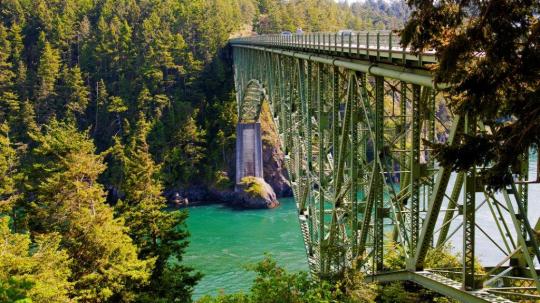 As soon as we arrived at the twin bridges that drape high over Deception Pass, my heart opened and waves of shear bliss washed through my body. I gobbled up the majestic scene with hungry eyes, and Stephen sat taller in his seat, imagining the boundless photographic possibilities of the day. I looked into the empty blue sky, and I saw an eagle in my mind’s eye. Without dropping my gaze, I casually mentioned to Stephen, “We will see an eagle today.” This I sensed. It was not a strong hit, just a subtle knowing. We parked the car at one of the lookout spots, gathered our things and embarked on what turned out to be a strikingly magical and spiritual experience.

On foot, we followed the usual tourist route. We gently hiked the narrow dirt paths that twisted along the hillside, which served up soul-filling views of distant, green mountain peaks, nearing tall evergreens and deep blue waters. This hillside that stretched up from the depths of the bay was lined with wild grasses, clumps of trees and patches of bright yellow wildflowers. The entire area emitted such profound energy. It filled me and thrilled me. I immediately wanted to sit right down in the soft brush and meditate. Deception Pass has been home to various Native American tribes for thousands of years, and I could deeply feel the powerful energies course through me. In those moments, I was no longer a woman watching the world; I was the land and the sea itself, flowing with the breath of earth’s spirit.

We continued to walk while Stephen opened his camera to the views. We trailed up to the road and along the bridge, crossing high above the watery pass and tall trees. In the distance, a bald eagle suddenly appeared, soaring effortlessly through the sky. I smiled, realizing that what I had sensed earlier was actually happening now before our eyes. It seemed to be flying near a red-tailed hawk, both searching the hillside with their keen intensity. They were too far to photograph, so we continued along the bridge in their direction. We slowly ambled around, snapping pictures, chatting, giggling and breathing deeply.

As we neared the area where the birds were flying, the sky fell empty. They had been gone for some time, so we sat down, resting on a log that lined the road. We relaxed and settled into each other. The entire time we were at Deception Pass, I was filling with pure love. I became so full, I felt as if this love was now pouring out from my pores, stretching my heart and tearing from my eyes. I felt such a cosmic connection to Stephen and to the expansive landscape of our lives together. Our conversation naturally drifted, and we were sweetly engaged in the topic of our union together. And then… magic happened. 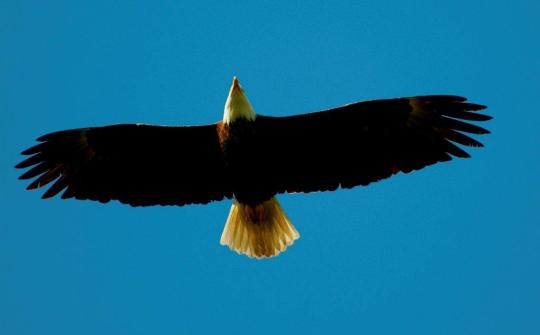 We suddenly looked up and saw not one, but two bald eagles soaring above our heads. They were a pair, matched for life. We had not seen them before and we did not know where they had come from, but there they were, circling us. They cut through the sky with wings spread wide. They flew lower and closer to us as they graced the space just over our heads. Stephen grabbed his camera in excitement, shooting as many frames as possible. We stood there for a long time like this. People stopped to watch the eagles and us. It seemed as if this mated pair was there only for us. I could hardly believe my eyes. I felt intensely blessed!

The eagles continued to fly around us until the camera’s memory card finally ran out of space and could no longer hold any more photos. We both looked down to change the memory card. When we returned our gaze to the sky, the eagles had disappeared.

Looking back at the experience, we both feel these majestic birds came to honor us, encircling us with their empowering and supportive blessings. This was a magical, poignant and stunning moment in the flow of our lives, a spiritual breath of light, love and endorsement.

This blessing heightened our time together. Golden hues seemed to gently kiss everything I saw for the rest of the day. We attracted more wildlife and more opportunities. The afternoon unfolded like thoughtfully crafted poetry. And, as we drove home in the early evening hours, the sun lit the skies and our hearts in flaming rose tones, casting warm, glowing, divine light on everything in its path. We were in its path.

I now realize that for the entire day, we were not only in the path but we were an integral part of the path, of a greater more expansive, interconnected, spiritual path. I have a sense that this is the case with every moment and every breath of each of our lives. We just have to open and flow with it. ♥

“I swear to you there are divine things more beautiful than words can tell.” ~Walt Whitman

Being the Path of Light

This blog is about Shana Dean, her worldwide Reiki Healing Arts practice and more. It's about her spirit, musings, natural recipes, teachings and exploration ~ all sprinkled, every which where, with a little magic.

If you poke around a bit, you’ll find information on what Reiki Energy Work is and how it can change your life, align you to your soul’s purpose, encourage synchronicity, and deeply, profoundly heal on multidimensional levels. It’s truly mind-bending stuff. (In a VERY good way!) It’s the stuff quantum physics is made of. It’s cosmic, universal, spiritual, physical and simply amazing. It’s also experiential; so when you feel it, you’ll know more. And, if you get in touch with Shana, you most likely will.

While here, you may find yourself motivated about natural, raw foods and why this diet and lifestyle is one of the most transformational healing modalities on and of the earth, not to mention it’s absolutely delicious!

You’ll read some personal stories, adventures, discoveries and life lessons. Don’t be surprised if you stumble upon some fine photography, whimsical poetic verses, or maybe even tiny bits of faery dust tucked in a few nooks and crannies along the way. There’s more to discover here if you poke around just long enough.

You never know what may inspire, empower and enlighten you.

So, pour yourself a mug of tea, sit back and do enjoy...